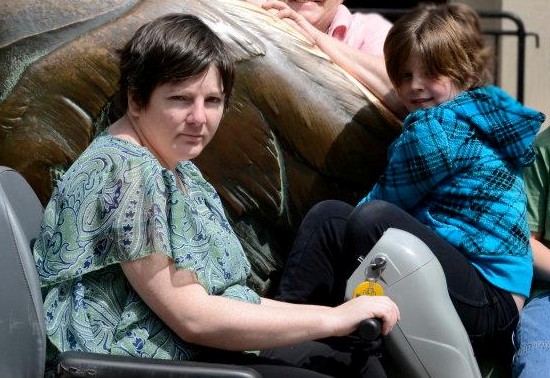 Katie is Haley’s Mom and they both have JHD

Katie was born in England on Jan 2, 1981, (that’s where I am from) and has a brother who is a year younger than her – Mike. Her dad had early onset – he was symptomatic in early twenties but not diagnosed until he was 29 – he died at 45.

We emigrated to the Us in 1988 when Katie’s dad was diagnosed with HD. He was originally from MD so the Air Force sent him back here for treatment as they thought at first he might have a brain tumor. So Katie grew up in the shadow of HD as she was only in 2nd grade when her dad was diagnosed. He had a lot more of the violent outbursts, mood disturbances than chorea at first and her childhood was traumatic at times.

She wanted to join the Navy and even at 18, John Hopkins refused to test her although I felt she had been symptomatic for several years. They said she was probably bipolar. So she joined the navy and was fine for a couple of months and then everything fell apart. She was diagnosed as having HD at 19 and it took us a year to get her out of the navy. 3 marriages later she has realized no-one loves you like family. It is so hard to watch all her friends abandon her over the years. The only call she got today was from her brother.

Katie is married but we have no idea where her husband is. She hasn’t seen him in two years and we have moved out of state.

When Haley started to develop symptoms and Katie’s health was getting worse I realized I needed to be home to look after everyone. Katie doesn’t get on the computer any more. She is in bed most of the day – she usually stays up for awhile after I help her bathe but she gets tired quickly. In order to stop working full time and become a caregiver we had to sell the house we had lived in and move somewhere cheaper. I put it in Gods hands and he led me to the Pennsylvania mountains!

Haley was born July 7, 2003, she started life as a happy go lucky little girl with a very infectious laugh. She went to headstart, Pre -K, then kindergarten. She learned her alphabet and started to learn to read. Then she failed kindergarten but was moved up to 1st grade anyway where once again she learned her alphabet and started to learn to read. She is now in 5th grade. She is good at science as she watches PBS all the time but she still can’t read and has so much trouble writing that most of the time someone at school writes for her. She is so stiff in the mornings that she can barely get down the stairs. She loves to play on the play station with her brother when they are getting along. He would love to play with her more but sometimes she doesn’t feel up to it anymore and he gets very upset. She would like to have more friends but doesn’t seem to have much luck making them. Haley’s brother is called Richard when hes being good nad ‘trouble ‘ when hes not. He was tested negative. I thought I would be happy when I got the result but instead I cried. All I could think was he would end up looking after all of us.

She loves purple and lime green. She likes to swim and ride her bike when the weather is warm, but +this time of year it is playstation

or curled up watching Netflix on her kindle. She seems to feel the cold more than the rest of us.