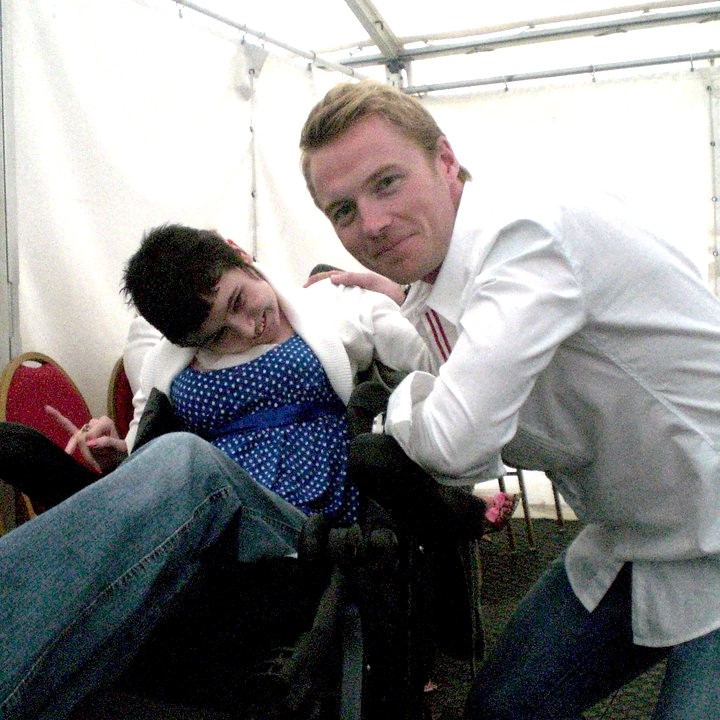 My Story with Huntington’s disease began in 1979, when I met Rikki’s father. I was 18. We didn’t stay together very long because of his behaviours, which many years later

I learned were typical of HD. For years I just thought he wasn’t a very nice person.

During the time we were together he once told me that his father had died of Huntington’s disease, but he didn’t explain much about it and I had no idea of it, so I didn’t ask further & just accepted it.

After we parted, I discovered I was expecting. I was already a mum to 2 year old Sarah & the thought of being a 19 year old single parent to two children was pretty scary & I almost didn’t keep Rikki…until I saw her little face. Something inside me melted & I changed my mind as soon as I looked at her. I am still thankful to this day that I took her home.

When Rik was 5 years old, my next door neighbor, told me that Rikki’s father had been diagnosed with HD. He went on to explain Rikki’s 50% chance of inheriting it and its terminal outcome. She loved Florida Pets Cats Small Children and Red Roses.

I don’t remember anything between that conversation & going to talk to a specialist at the hospital. I recall the specialist telling me that a test was being developed or had just been developed but wouldn’t be available to Rikki until she was 18. He told me I should have her sterilized as soon as she began her periods so that there would be no risk of passing it on to her future children.

He also told me that people under the age of 40 didn’t develop HD & that most of them are around the age of 60.

My initial worry was taking away Rikki’s right to have children. I eventually figured that if she wasn’t going to get this disease until she was over the age of 40, then her children could have grown by then & anyway, we, her family, would be there to take care of her children for her, if, by any chance, she couldn’t. These days, I am grateful that pregnancy never became an option for her.

With little HD information & no internet to look any up, we went back to living our lives as normal & I went on to marry someone else & had 2 more daughters….neither at risk of HD just as my oldest isn’t.

In 1993, a lady from Oxford hospital came to visit me at home to talk & update me on the progress of the test that was available. While she was there a question suddenly came to mind, so I asked it. I don’t know why…I had never considered it before. I asked her if children could develop HD? She told me that it was extremely rare & quite unlikely. My mind was at rest & I never gave kids & HD another thought…until I needed to.

By the time Rikki was 13 I had became aware that she wasn’t quite right. Something in her had changed. She had always suffered from unreasonable jealousy over her sisters…especially on their birthdays. She could also be repetitive & clumsy. And her tempers were wild but we put it down to her personality & accepted it as her. We would often laugh with her about it…which I’m glad we did. It defused many an occasion & kept HD out of our lives for longer than it may have.

When I look back, I see that Rik began to change around the age of 8 or 9. At 13, she had typical teenage behavior, but there was also something else I couldn’t quite put my finger on. It wasn’t just the change in her daily behavior,- moods & aggression.

I watched her closely. I asked friends & family if they could see something. Their answer was always no. They said that it was typical of teenagers to behave as they did…it’s in their job description.

Already having one teenager that fitted the job description well, I tried to accept that reasoning, but yet something about her, still niggled me.

I surprised myself one day by asking her out of the blue if she was drinking alcohol or taking drugs…but I surprised Rikki even more. The look on her face was total shock. I knew immediately that that was not the reason for the difference in her. Deep down I knew she was a good girl who wouldn’t dabble. It was easy to believe her & I just knew they were not the reason for any changes.

I’ll never forget the night I found out. You may think me strange for admitting this, but, as I was dozing off to sleep, I heard a voice clearly say “Rikki has Huntington’s disease”. I wasn’t even thinking about it at that point.

Suddenly I was wide awake and from that moment, I knew without a single doubt she had it. I didn’t need for her to have a test to confirm it.

And I’m thankful to say I had never heard voices before, nor has it ever happened since. It was strange!

I called Oxford hospital the next morning and told them Rikki was displaying signs of having HD. It was arranged for Rik to go and see a neurologist.

Cutting the story short, the neurologist couldn’t see HD & told me I shouldn’t wish it on her. Fortunately though, she got in touch with Rikki’s school to inform them of my concern. They wrote back to say they too had noticed change in Rik. And so she was tested & on February 5th 1994 we found out for sure that she did indeed have jhd. My/our life’s changed forever.

Rikki bravely lived for 14 years with it & they were the most difficult years, yet the most precious. She smiled & laughed so easily & I adored the way her eyes would light up.

I still had little knowledge about HD & so we discovered things together along the way, the best we could. It wasn’t easy at times but we somehow got through.

Rikki’s last 8 months were the hardest & saddest. She became ill but we didn’t know what with. I suspect the flu bug that was going round or even a tooth abscess… not that I did at the time.

I was panicking that she could suddenly no longer eat or drink & though it had been difficult for her for sometime, I was able to sustain her weight without a peg feed….something Rikki had personally said she would not want when she was just 14.

I believed I would honour all of Rik’s wishes if possible, but I knew that if she wasn’t pegged, she would soon die without food or drink. I wasn’t ready for that so I had her pegged.

Sadly, it tuned out to be the wrong decision for Rikki. She couldn’t keep the feeds down & could vomit up to 20 times a day. She seemed to be in almost constant pain & the still body that she had mostly lived with was no longer still. I was distraught. I had no idea it could be soo bad.

After months of hospital visits, researching on the net, talking with people who lived with HD as well as doctors & specialists, none of who could help her, I came to the conclusion that my need to keep her, had made her suffer too badly. So I decided it would be kinder to have the peg feed stopped. After many talks with the family, who were all in agreement, & the doctors & specialists, it was agreed that peg feeding was of no benefit to Rik & it was making what little quality she had, zilch. None!

We took Rikki into my bed & my husband & I lay beside her for the next 11 days, hardly daring to leave her side.

Every one who ever loved Rik came to visit her. We played her favourite music every day & as we always had as a family together. We laughed where we could &.there was a happy atmosphere when all were there with us. It was just what Rik would have wanted.

It was a very precious but very, very difficult time. And to this day, I can’t recall those months without sobbing.

Monday morning. Rik closed her eyes for the last time, though she stayed with us until the Thursday.

Family & friends left Joe & me to be with her alone. I told her everything I ever wanted to say but was too scared of before. How much I loved her & would miss her & how privileged I was to have been her mum. I reminisced with her & cuddled & kissed her sooo much. I told her she had nothing to be scared of & that she would still be with us whenever she wanted to be & that she was to let us know,-if she could.

On the Tuesday, one of the nurses said that she expected Rik would be gone by

Wednesday. But I had yet another feeling & knew that she wasn’t going until Thursday…Thursday the 25th of October…the birthday of 3 family members. It just seemed fitting for Rik should have the focus on the day of family birthdays. That’s my girl! 🙂

On that morning, again, I suddenly knew that she wouldn’t be with us much longer so I asked Joe to go & tell her sisters to come & say their last goodbyes. One by one they did & each of them told her how she had enriched their lives & how much she loved her.

As the last one of the girls left her, I noticed her breathing had stopped, but then her cousin came to goodbye & she took another breath, then just as the family all clambered on the bed & I pulled her onto my lap for a last mummy snuggle, she took her very last breath. She waited for us all to be with her.

God, I love that girl & I miss her soo badly. But I am happy that JHD can’t hurt her any more.

There are times that I know she is still with us. She shows us. We have had soo many precious signs from her.

The down side apart from missing Rik is that I still feel intense anger that there was nothing that could be done to help her. Any tried medicines only seemed to make her worse. She spent her last weeks on morphine. 😦

Rikki will forever be in my heart, forever my girl & one day, we will meet again. And no mother should have to make the decision that I made.

We called different things. I often called her dolly but her sisters called her Rikstix. Rikki rocky & her older sister called hear ‘legs’. Those names were relevant to them based on different reasons. To

me she was just simply my dolly. Rikki’s favourite films were happy, snappy musical like Grease or Coyote Ugly & Annie. She also loved music/concerts of her favorite bands/singers. She loved all animals but her overall favorite was monkeys, chips, apes etc. They fascinated & enthralled her. She always loved our dogs & cats too. She was very active & sporty when she was young & loved to skate, swim, ride her bike, acrobats & dancing but as she lost those abilities her main love was singing. Even though she lost that ability too. It never stopped her from trying.  She Loved Pink & Lilac. July 3, 1980-Oct 25, 2007. 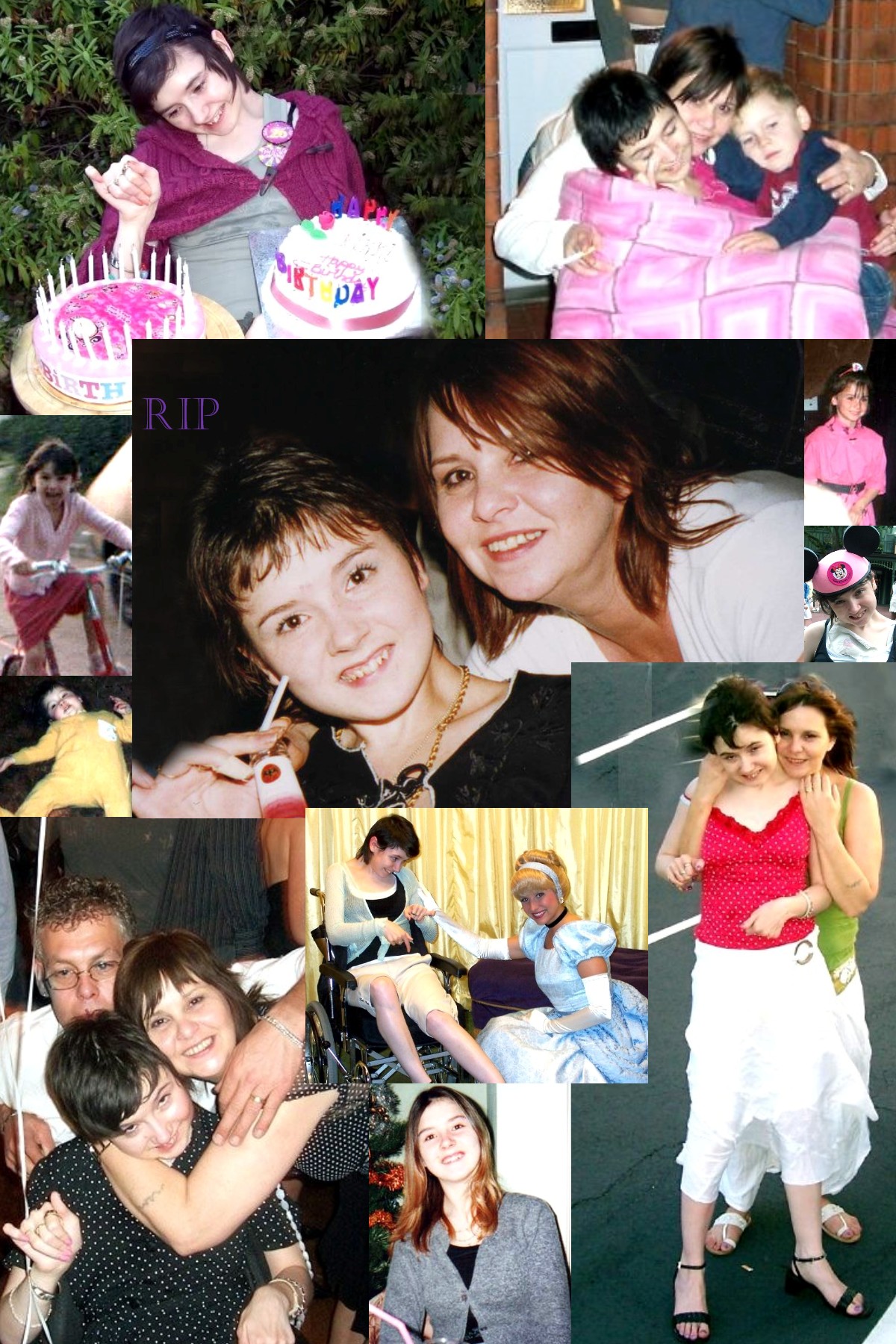