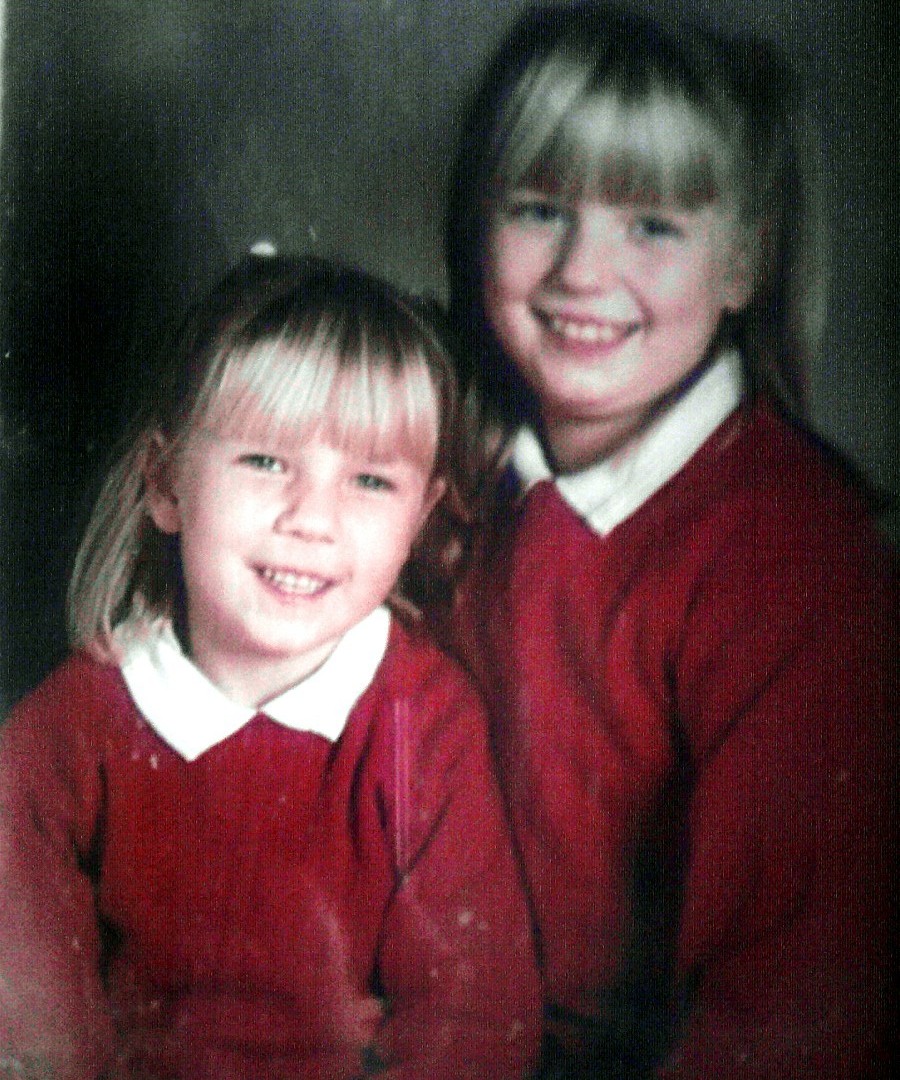 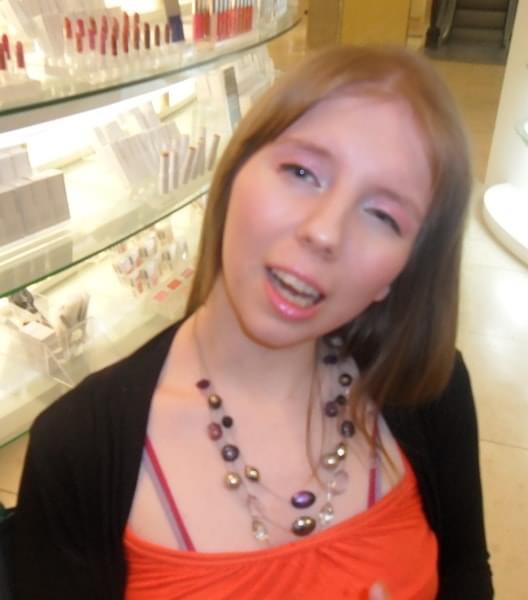 Rachel’s father and I had split up when she was a baby. This was due to his sudden mood swings and temper issues.He was even violent on occasions.So I was a young mum aged just 19, he was a bit older than me,24. I knew he was at risk for HD but really had little understanding of the illness,other than it really was not a good disease to have and you die in the end. I had never even heard of it before I met him. Little did I know how much it would come to affect my life. A genetic counselor came out to his sister’s house before we split up, and we went along to with baby Rachel.The gene had just been discovered and she was really hopeful a cure would be found before Rachel grew up.I was amazed how little her dad and auntie actually knew themselves since their mum had HD!!

I went on to have another daughter to another relationship.By the time Rachel was just 4 years old her dad was already obviously symptomatic himself and I went to my local library and spent the afternoon on the computer researching everything and anything I could on HD. I realized her dad become symptomatic with HD whilst he was with me in his early twenties,as it described the mood swings and anger issues ect.It was only then I discovered JHD,no one had told me kids could get this to!!!I remember feeling panic and pure fear,her dad had already started with HD a good 10 years earlier than his mum.Plus most cases of JHD come from the paternal side.Would it skip back another 10 years or so?I looked for the early signs of JHD and remembered them,it didn’t make for pleasant reading. 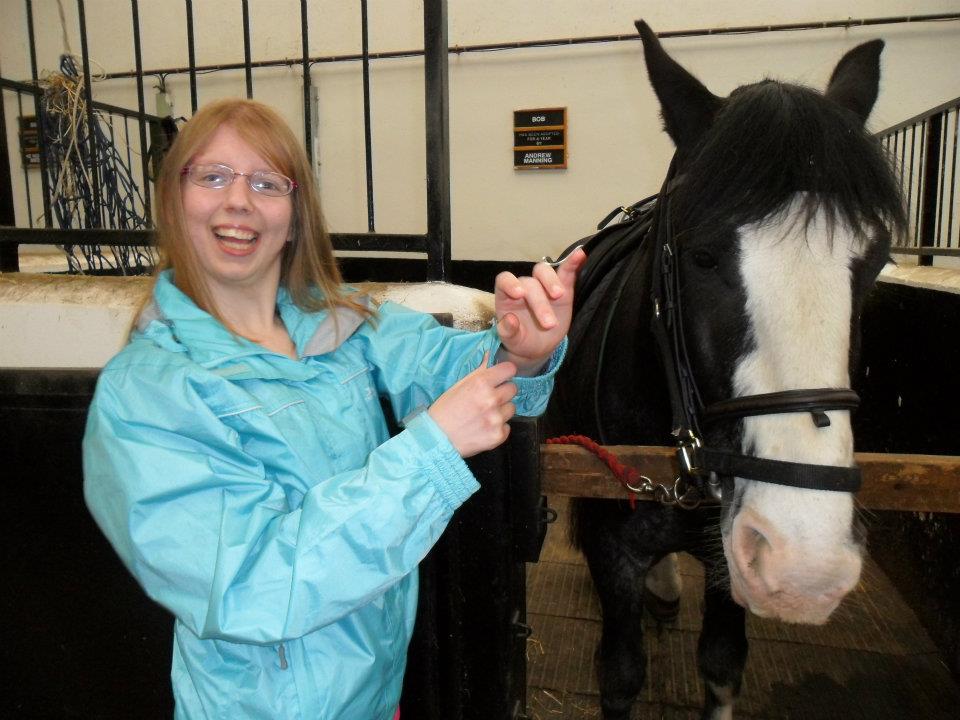 Her dad would visit Rachel at our house.It was like the pied piper when he knocked on the door.A lot of kids looking at him,some would ask what was wrong as he jerked about,other would giggle.Some would call him names and this would hurt Rachel very much and she would cry when she was playing out.She said she didn’t want HD when she grew up as people would laugh at her to.

When Rachel was around 8 her dad was in and out of care homes and hospital.This went on for a couple of years. We saw less and less of him as things were not good between myself and his family. I don’t think they ever believed she was his kid as she was so much like me with her blonde hair and blue eyes, so opposite to her dad and half brother. My ex had another son to another lady a couple of years or so later.His step mum even said there was nothing of my ex in her what so ever.I was angry with the ignorance my ex and his sister were brought up to go on and have kids with out a thought,his sister had 5.They were angry with me as they thought I told Rachel too much and kids should be kids. We found out a few months later her dad was in hospital and didn’t have very long. I took Rachel to see her dad early in the morning as I did not want a run in with his family.It shocked me to the core how bad he looked and the picture in my head will stay with me forever.He was skin and bone and tubes everywhere.His family had put a picture of his son by his bedside,no picture of Rachel. He said ‘Rach’ so I knew he knew she was there. We saw him a couple more times after that before he passed,he was only 35 himself. My family and I took Rachel to the church service but not the burial.I thought life could not get much harder than taking a 10 year old to her dad’s funeral. Especially as I started to notice things in Rachel to,she was around 9 1/2 then.

She had started blinking a lot, quite fast some days.A few weeks later a strange throat noise had started as if she was trying to

clear it. She would do it a lot and you would have to tell her to stop it. Did I see her shoulder just twitch ever so slightly to?I was getting concerned but tried to push it to the back of my mind.Then we had parents evening. Her class teacher asked me if their was anything going on at home. She went on to say her work is going backwards to that of a reception child. She had no concentration and could not remember what was her tasks in class. Her hand writing which was once very neat was now scruffy. She was driving other kids nuts with the throat noises to. My gut tightened and I just KNEW. I burst into tears in front of the teacher! !I explained to the teacher what I thought she may have and she told me to seek medical advice urgently.

I took her to my local GP and spoke to him without Rachel in the room. He had pictures everywhere of his 4 beautiful blond haired girls and he gave me that look that I would see many times over the years to come that only parents could understand.He understood my pain and empathized but thankful it was not his child.He referred us to the local pediatrician at our local hospital. Our first appointment he had Rachel walking up and down and did a quick examination on her. I told Rachel we was seeing him about her feet as she said they were sore. When she left the room he went on to tell me how rare JHD was and it was unlikely. I told him I knew my own child and something was not right,even the family history. The throat noises had stopped though,it gave me some hope I had got this so wrong.He agreed to see Rachel again in 6 months and would monitor her. We went every 6 months for a couple of years. He agreed to do an MRI scan, she was 11 now and had moved to high school. School had continued to report decline to. Amazingly this scan came back clear and my hope was fueled yet again. I knew in my head though she still ticked many of the boxes, but my heart screamed NO!!

Her younger sister asked me one day why Rachel could not ride her bike any more. She had little spacial awareness now to. I just shrugged it off. AT 12 years old she started speech therapy as people were finding it hard to understand her. For awhile this did help. She also had various memory and cognitive tests over the next couple of years,results always came back worse than previously. At 14 she received a statement of special educational needs. Bullying at school had started to. She was pushed down the stairs and had her school bags ripped. She even got beaten up twice in a few months. Once I was called from work as she had been taken to A & E. A girl had pushed her over in class and she needed stitches as her head had split open. I refused to send her back until I had a meeting with the head teacher. She was given a teaching assistant who barely left her side, but I still could not settle she was safe.

She was 15 now and her doctor agreed to do a second MRI scan. He ended up emigrating to New Zealand so a locam gave us the results.This time they had come back ‘highly suspicious’. He would still not confirm JHD and we was referred to see an HD specialist in Manchester. We both cried and hugged in the hospital stair well. Later she told me she did not want to die from Huntington’s Disease. A few weeks later the appointment came. The specialist was amazed we had not been referred earlier. He took one look at her and said 99% certain early stages. My heart broke again as this was the specialist saying it now. A blood test in our home town followed and her new doctor gave us the result,HD+. She cried,I cried,even the doctor,it was truly awful. 15 years old and given a death sentence. It was 6 whole years from first going to see my GP to get the ‘official diagnosis’. She did not do her end of school G.C.S.E exams at 16 as mentally she just could not do them.

Rachel was 18 years old and attended a special school. I have given up work to be her carer. Sometimes she had bad days and did not go to school.S he has deteriorated slower then most kids with JHD as she should’ve been end stages now and she wasn’t. They have designed her own time table to do stuff she enjoys such as baking and palates to help keep her joints subtle as they can. She uses a wheelchair some days to as her balance isn’t great but she can still walk. She has regular physio and speech therapy there, although SLT now mainly concentrate on communication devices and swallowing techniques. Mentally she could be like a small child some days,others the young adult kicks in and she cried so hard as she knew what was happening to her. As a mother to just watch this awful disease take her is so heartbreaking. It’s like I’m dying with her. She loved to watch  DVDs at bedtime, musical films such as High School Musical, Hairspray, Mama Mia, and Grease.She loves baking, swimming and dogs. 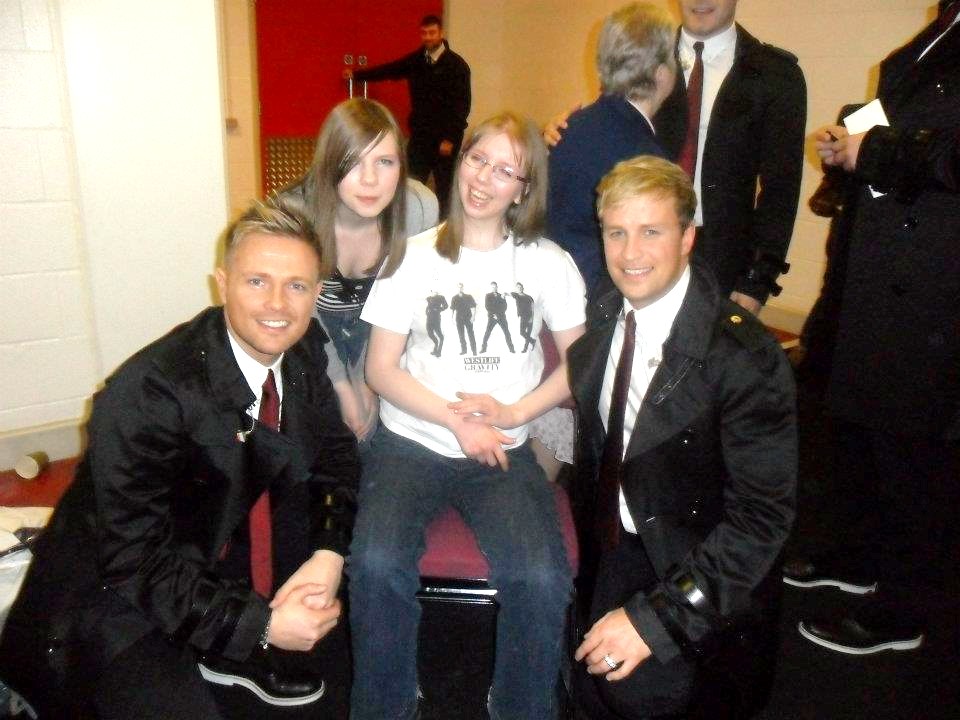 Thanks to the Make a Wish Foundation Rachel got to meet her favorite boyband Westlife in March 2011.We had a lovely day out with a limousine escorting us around town all day until the concert in the evening.We met the lads before the show and they were lovely with her.They even dedicated ‘You raise me up’ to her at the show. She was still smiling and although it was a few minuets out of Westlife’s day,it will be a life time memory for us.That’s all we can do she kept those smiles coming as long as possible. 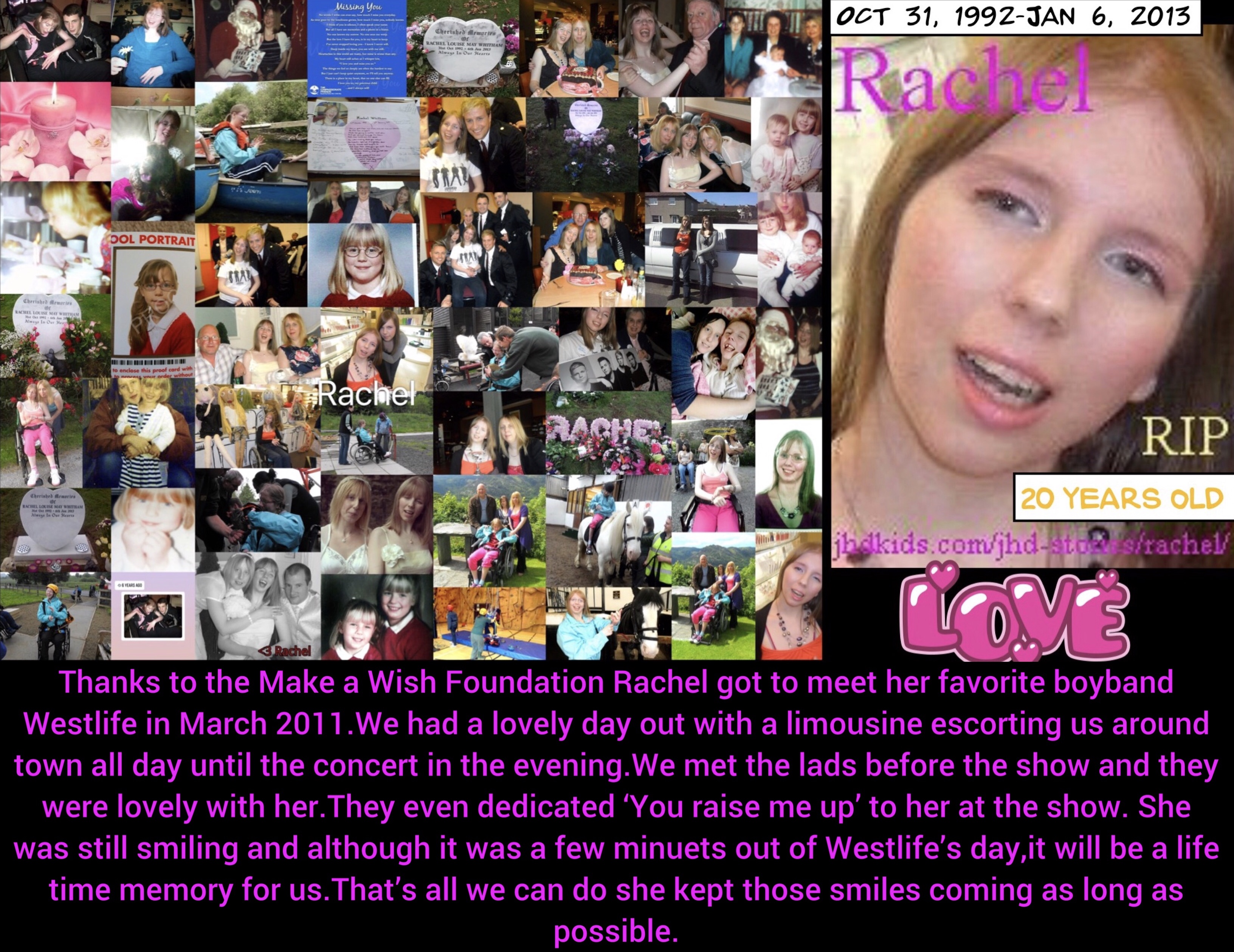 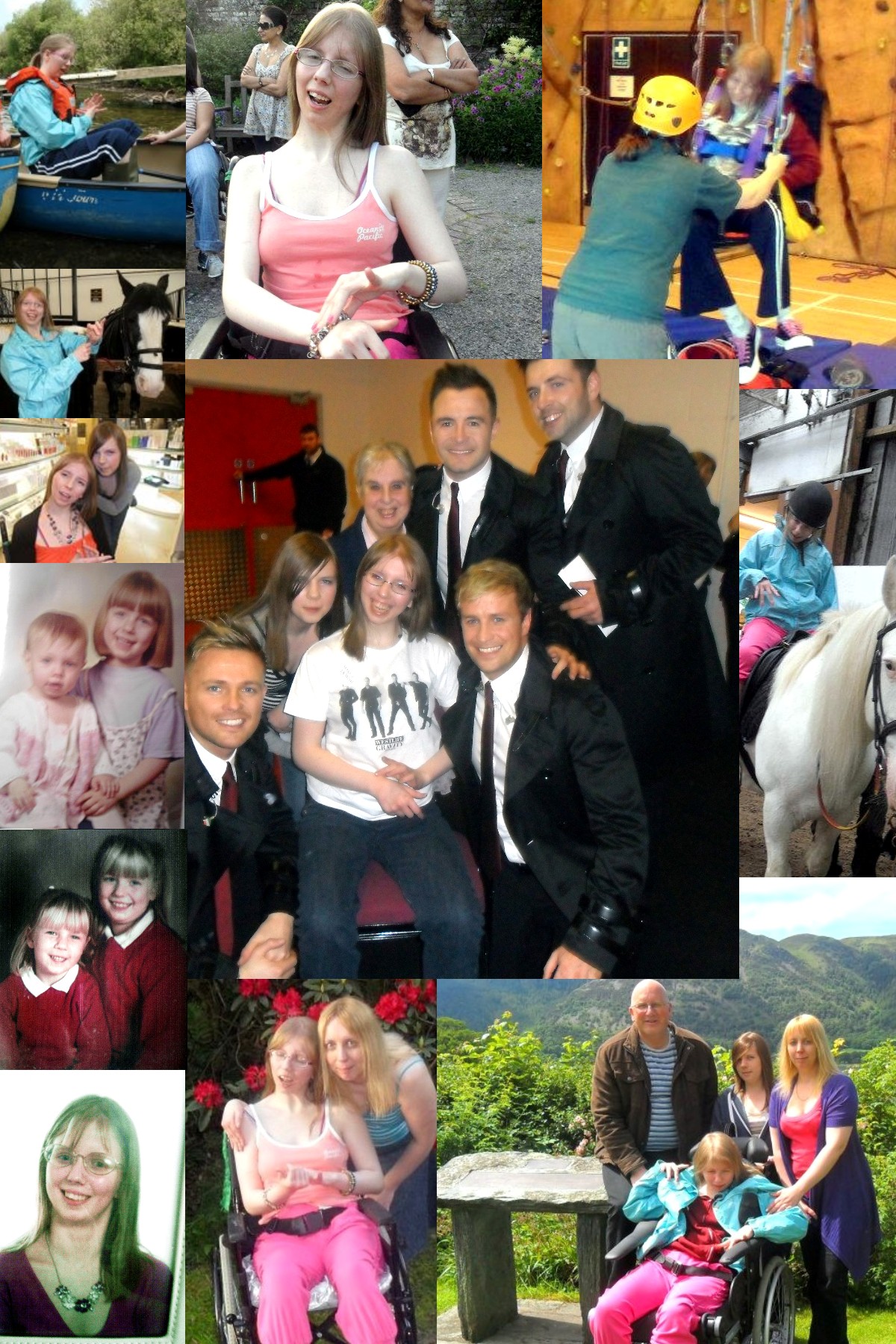