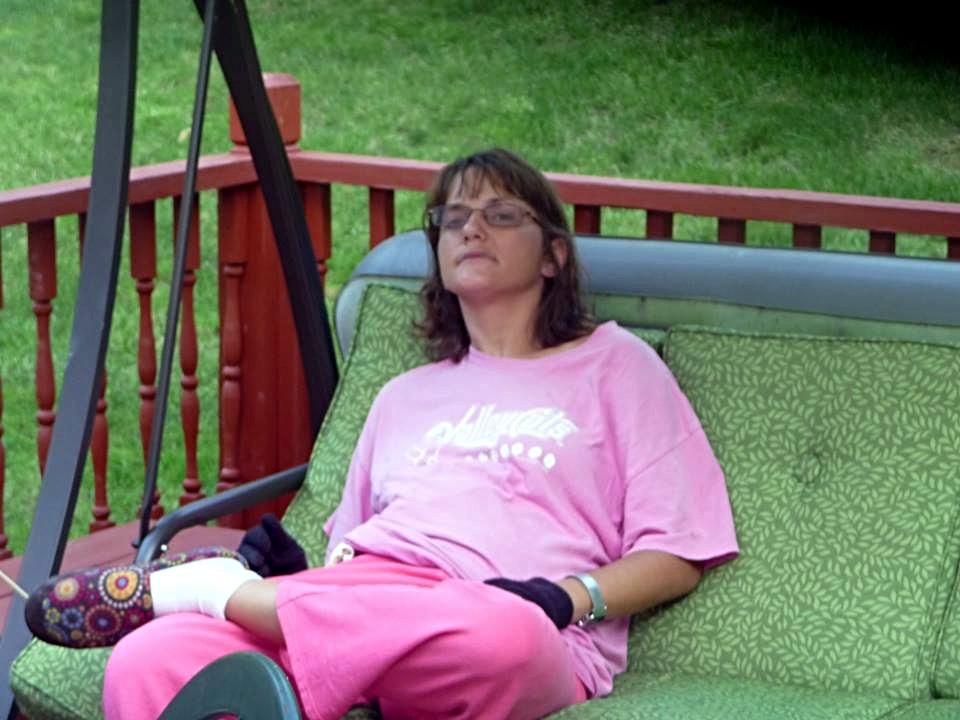 This is the real story of my daughter Allison, and her long battle with Juvenile Huntington’s Disease. People with jhd live about 15 years from the onset of symptoms. Juvenile HD strikes before age 21. Its victims survive an average of eight years. Fifteen years into her battle with juvenile HD, Allison still possesses her precious smile and finds a reason to see tomorrow.

Toni, Allison’s mom, died in 1993, shortly after her 33rd birthday. She was adopted, and there was no reason to suspect that she was at risk. Her native state of Massachusetts did not divulge her birth mother’s medical history to her adoptive parents. When she became ill, it took a long time to figure out what ailed her. There was no test for HD at this time. The gene mutation that causes it was discovered by scientists at Massachusetts General Hospital in 1993, a month before Toni died.

Allison has fought with courage, dignity, and often humor, despite losing so much in her young life: her mother, most of her friends, and her dream to be a college professor. Many folks who should have helped her did not. We have learned to find our own solutions and forge our own way.

I have masked the identity of those who did not always serve Allison well, with the hope that they will do better for others. I am telling her story as a resource for other folks who are battling Huntington’s Disease and to bring awareness to those unfamiliar with it.

I hope that Allison’s story leads to a greater awareness of Huntington’s Disease and erases the misinformation and prejudices some have about this illness.

Allison loved animals and computer games mainly Virtual Families. She loved sports, especially baseball. She loved cream puffs. She loved the Beach Boys. The guppies she got for the nursing home are now unlimited numbers.

She has severe UTI infections, choking and eating issues. They had to place a feeding tube after numerous suggestions from both sides, she wanted it. They almost didn’t let her in because they didn’t allow ‘bottled liquid’ as in her feeding tube, they were made to step aside and they got to enjoy the concert.

Allison had seen a story about a pot belly pig in Chicopee, Massachusetts who had gotten into a little trouble with the law. “Kevin Bacon” was living with an elderly lady in her apartment. The city of Chicopee did not allow this and Kevin was evicted and banished to a foster home. Allison wanted to go see Kevin. and we drove out to Chicopee. Allison asked if she could have Kevin for her birthday and, Kevin came home in a dog carrier. A pig was not going to live in my house and Kevin went to live in our barn. I built a paddock for him to exercise in. We soon decided that Kevin needed a friend and Lucky, a miniature horse from the Catskills,  joined Kevin in the barn.  Allison enjoyed sitting out on a bench to watch them and feed them treats.

Most people in their 14th year of Huntington’s do not walk at all. We both refused to give up and our stubbornness kept us both going. Allison still passed her time watching her DVD’s and, of course, playing Virtual Families on her computer.

By January 2016 travelling with Allison became nearly impossible. Going to doctor appointments was no longer feasible.  Brian Wilson of the Beach Boys was coming to Tanglewood that summer. Of course we had to go. Allison was very weak but with Rob’s help we made the trip! Allison had a wonderful time and other than of a great concert, there were no stories to tell. It turns out that this would be her last concert.

On the last Sunday in January, I was awakened to Allison screaming and yet unresponsive. I tried for a half an hour to bring her around, but could not do so. A call to 911 They transported her to Albany Med where Allison would spend the next eleven days. I told my son Rob that he should come up. He came for the weekend and we both knew that this might be his final goodbye . Ann and I tried to keep Allison engaged and contented. She kept slipping in and out of cognition. On Thursday, she played Virtual Families for what would turn out to be her last time. Sunday was a quiet day. Allison watched her DVDs and at 4:00 p.m. I bathed her. She was not breathing 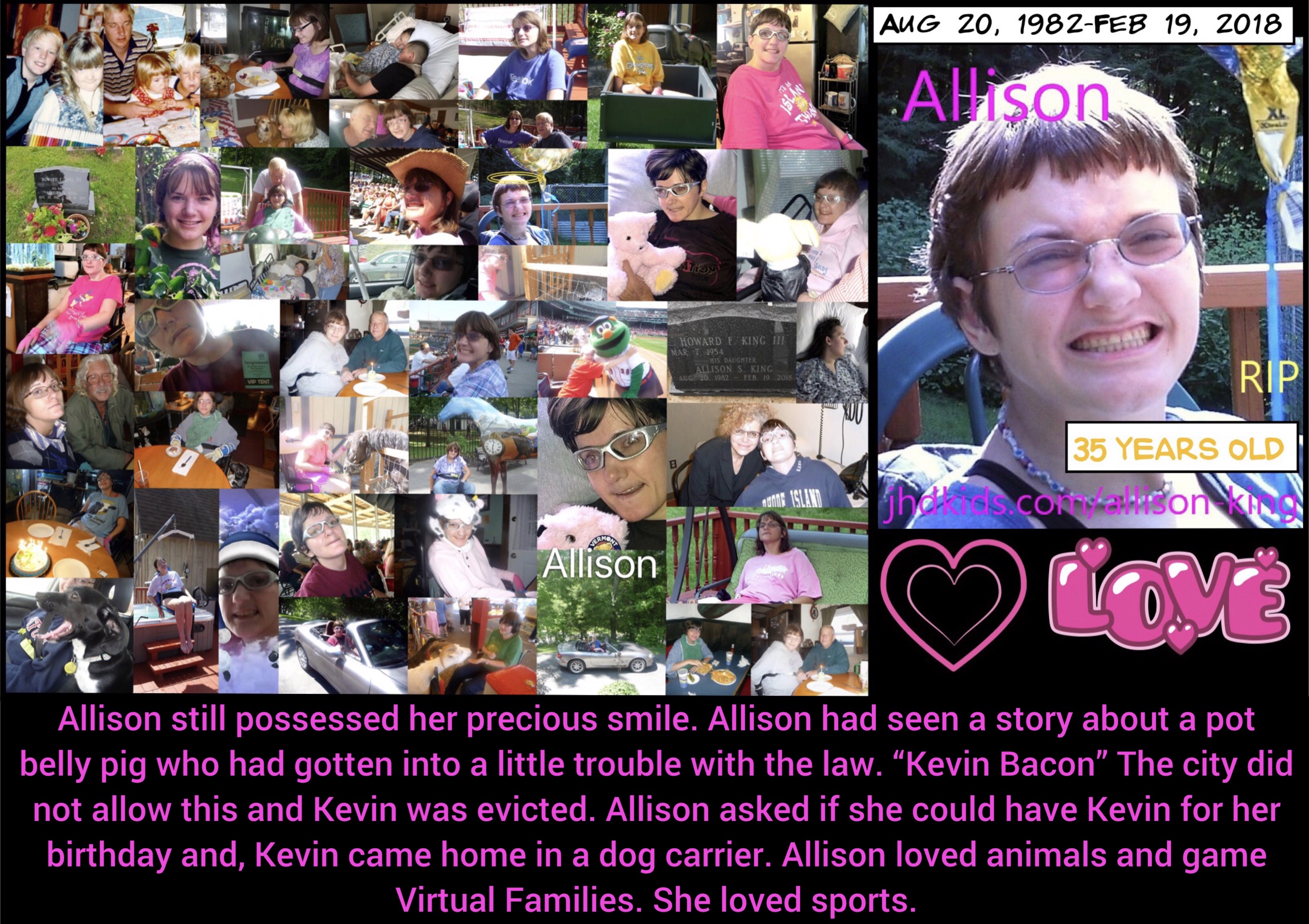 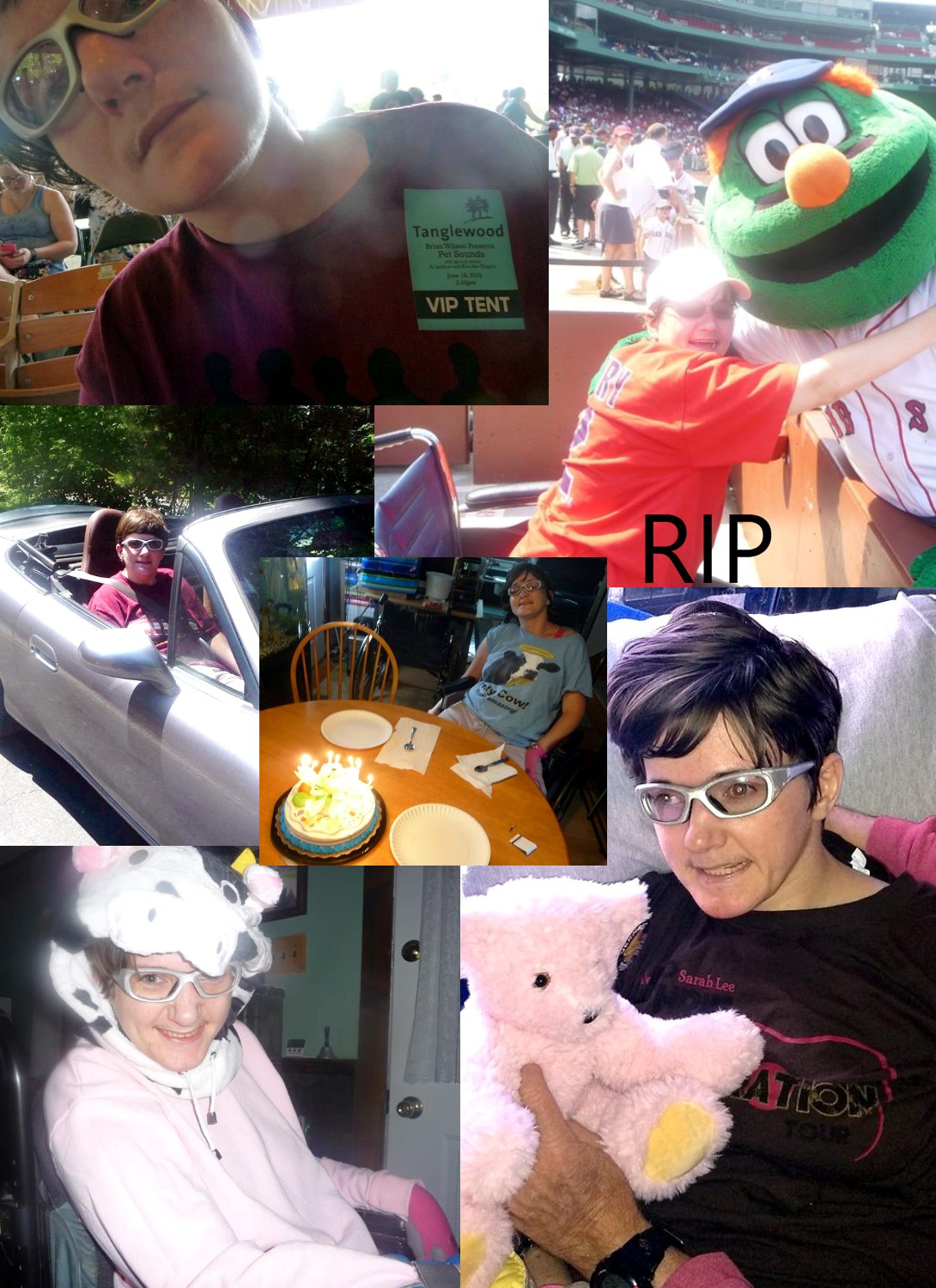